Alpenglow (From the Chino Cone in Palm Springs) 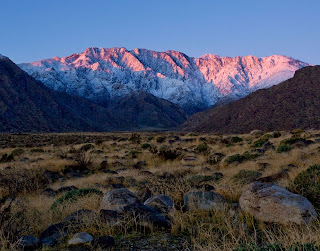 Rainbows fascinate nearly everyone. Alpenglow fascinates only those who awaken early and live near mountains in winter.

I’m thrilled by that rosy glow of snow-covered mountaintops as the first rays of sunrise strike them. And living in Palm Springs, California, I have the opportunity to witness and photograph this beautiful phenomenon.

Last week several days of relentless desert rain came with the promise of a spectacular sight when the clouds would eventually lift: bright white snowy peaks on the San Gorgonios, San Jacintos, and Santa Rosas. (Sometimes, when the rains are especially cold, we see our entire Coachella Valley ringed by snowy mountains.)

The anticipation of that had everyone talking even as they dealt with flooded streets and leaking roofs. And many photographers were looking forward to capturing the scenic juxtapositions of palms and citrus trees with snow.

What I looked forward to was the first morning of alpenglow. It’s then that the snow is freshest and deepest, and the rising storm clouds sometimes provide additional drama to early morning landscapes.

Shooting alpenglow requires getting up while it’s dark, dressing warmly, venturing out to my chosen vantage point, planning my foreground and composition, and setting up my tripod and camera in the chilly darkness. (It can also be accomplished in a more casual way by running to get your iPhone or digicam and grabbing a shot when you happen to notice the sunrise on the mountains as you pick up your just-delivered morning newspaper from your rain-soaked driveway.)

Just before this image was created, the black night sky had turned to a brilliant but dark shade of blue. The line of white mountain snow stood out in stark relief even though it wasn’t yet illuminated by the sun. (I’ve yet to photograph that to my satisfaction.)

I made this photo at the Chino Cone, an alluvial fan that spills from the base of Mt. San Jacinto and welcomes all who enter Palm Springs from the north with its broad expanse of boulders and desert flora and fauna. (The Visitor’s Center, formerly the famed, architecturally significant Tramway gas station, sits at the base of the Cone, and the road to the Palm Springs Aerial Tramway passes through it.)

What made this image hard for me to capture and render as a printed photograph?

First of all, the foreground was illuminated only by sky light from above, and since the sky was still quite dark, so was the foreground. In this instance, the mountain peaks were illuminated from the side by the rising sun. The result was a very distinct contrast, requiring quite different exposures. (To show this great dynamic range, some photographers today might use HDR techniques to shoot multiple exposures and combine them into an image that would show both the foreground and the mountains exposed beautifully. I chose to try to keep this image more ‘real’ looking.)

Secondly, alpenglow lasted for a very short time. Just before the rosiness appeared, the snowy peaks became whiter; then they gradually turned pink, and then quickly they became bright white. It was a brief but thrilling moment. (Then the rising sun continued to gradually light up the whole landscape, and for a half hour or so, that warm light of sunrise yielded exciting opportunities for image-making.)

A third challenge for me was choosing which direction to photograph the alpenglow. Right in front of me the San Jacinto mountains were receiving the first kiss of the morning sun, and to the north, the spectacular San Gorgonio mountains were also in alpenglow. I chose to attend to both. (At another time I’ll feature an image of that incredible sight.)

And fourth, since I wanted maximum depth of field (to allow me to show the rocks and the field of brittlebush that will soon be abloom with bright yellow flowers), I had to increase my ISO to levels where noise, especially in that dark foreground, became a factor in printing the image.

And lastly, I found that I wanted to change lenses during these brief moments, moving in closer to the peaks for a few shots and then back out to reveal the context of this exciting event. (To see a close-up image of alpenglow on a nearby peak, please check out my Facebook Fan Page “Image of the Day” for Sunday, January 24, 2010.)

After every photo shoot, the work continues: the uploading and organizing of files, the selection process, and the preparations for printing. My goal is to choose the capture that will best convey the story of the experience of alpenglow. It is marked by soft brilliant light coming from out of the near darkness and then changing to the harsh white of the snow as daylight takes over.

Even with a well-captured image, rendering a photographic print that shows both the subtleties and the magnificence of alpenglow can take many hours of work on the file, including changes in vibrance, saturation, contrast, brightness and sharpness.

I think I improve my chances at perfecting the photographic story of alpenglow every time I put on my photographer’s gloves in the field to prepare for and await the coming of the light.
Posted by GARY DOROTHY IMAGEVILLE at 10:29 PM

Labels: "Alpenglow (from the Chino Cone in Palm Springs)" 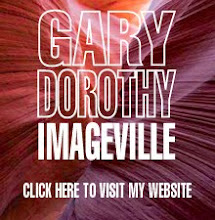 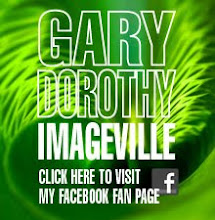